This guide tells you what parts of a spinning reel are and what they do to help you catch fish. So if you want to find out how your spinning reel works, keep on reading. After reading, you may also be interested in our guide about the parts of a baitcasting reel.

The user rotates the handle to bring the line back in once they catch a bite on the bait, and so the handle of the spinning reel must be smooth to the touch and comfortable to hold. It is also important that the reel’s handle isn’t too large or too small so that everybody can get a good grip on the handle regardless of the size of their hands.

But this isn’t the only reason for this design; the handle is also suitable for left and right-handed people. The spinning reel handle is usually held in the user’s non-dominant hand, so whether you are left or right-handed isn’t as important as you might have first thought.

The body or frame of the spinning reel plays a massive part in its durability. Due to this, the body is usually quite dense and is commonly constructed using metal, primarily aluminum or graphite, but it is sometimes often made out of plastic.

This part of the spinning reel can differ significantly depending on the type you are buying, mainly varying in shape and size depending on the price you pay and the company you purchase from.

Additionally, the weight of this component will also differ significantly depending on the one that you buy. Some companies have deliberately constructed the body/frame of the reel to be lightweight so that the user can have control. In contrast, others have chosen a more durable metal to be the priority rather than the weight. So it is pervasive for the appearance of spinning reels to differ due to the design of the body/frame.

Next, let’s take a look at the spool. This component is critical as it plays a massive role in how successful your attempts will be at catching fish. The spool (learn how to spool a baitcasting reel here) is the part of the reel that holds the line you will cast to try and get a bite.

The design of the spool is essential as minor design faults in it can damage your ability to get a catch. Despite this, some manufacturers fall for these common design flaws, including rigid spools which cause line breakage and spools that are too small to hold enough line to get a catch.

Generally, you will find that the spool in a spinning reel is constructed with metal, usually aluminum or graphite, just like the body/frame. The line is then woven around the axis inside the spool and then connected to the other reel components to cast your line easily.

The spool is a component that is often overlooked, but as you can see, it is imperative. Purchasing a reel with the wrong spool-type can significantly limit your fishing ability, so you must consider the length, size, and spool that a spinning reel has before buying it.

While this is technically another spool component, the drag adjustment knob is still an essential part of the spinning reel, so let’s look at it separately. The drag adjustment knob usually consists of a set of buttons attached to the spool and can be easily pressed to increase or decrease the friction of the line.

In particular, the drag adjustment knob is important if you are bass (learn the best way to hold a bass here) fishing. They can be incredibly resistant to being reeled in and will commonly fight against you reeling the line in as they attempt to pull it back to the water.

The drag adjustment knob is directly linked to the spinning reel’s drag ability and depending on the type that you buy, it will be better or worse. The drag system is usually constructed of metal washers that line the spool. It can be challenging to master, especially if you are still relatively new to the fishing industry.

Commonly, spinning reels have an open-face design which allows you to see the spool as it turns with the line. This can make it harder to master the drag system, and because of this, it can take some time to get a feel for the rod and the reel together. But once you have the drag system under control, it is incredibly important if you want your fishing trips to succeed, especially when bass fishing.

This reel component is crucial to the drag system of the spinning reel. The anti-reverse’s job is to prevent the drag system from turning back when activated, as this can increase the chance of your fish successfully fighting against the line and breaking free.

Usually, the anti-reverse is a component of the spinning reel that can be activated as and when needed, rather than something always at work. It is generally triggered by a switch, allowing users to switch it on when they need to use it easily.

While the main job of the anti-reverse is to prevent the line from turning backward and fish from escaping, it also plays an essential role in keeping your line intact. If the line is forced backward, it is incredibly likely that it will tangle, snag, or break, so the anti-reverse also ensures that your line will be safe by preventing it from moving backward.

It also gives the user a lot of flexibility in how they use their line, allowing them to increase or rescue the tension on the line when they need to. This is very important to experienced anglers as they will have methods and techniques for years, and this component will allow them to continue doing so.

The bail is also a very important component of the spinning reel as it is unique to this type of reel. It is designed to help the line move on and off the spool and make casting your line more accessible.

While some other different types of fishing reels have issues with backlash and line tangles, the chances of this occurring in a spinning reel are significantly reduced by introducing the bail to the design. This is because the bail prevents the line from running freely off of the spool when it is not supposed to, giving you much better control over the line.

You will find the bail on the reel’s body, directly next to the spool. The bail will usually be attached to the reel on a connection that allows you to quickly flick the bail on and off without much effort to connect it when you need to use it promptly. The best bails will have an arm that provides little resistance while remaining sturdy, ensuring that this component withstands regular wear and tear.

Another critical component of the spinning reel, especially the best ultralight spinning reels, is the seat. You may also see this component referred to as the foot as the names both mean the same thing. This component is essential for combining your fishing rod with your spinning reel as it is the bridging point between the two.

The majority of reel seats will be rectangular as this aids the ability to connect to the fishing rod. It will also commonly look like an add-on to the existing reel and will be noticeably different from the rest of your spinning reel in appearance. Despite this, it is widely constructed with the same material as the rest of the reel, aluminum or graphite being the most common build material for this component.

Some people may argue that this is the most important component of the spinning reel, as to whether or not the reel will be compatible with your rod all lies in the seat. This is why it is recommended that you buy your rod and your reel at the same time if you are new to fishing, as this will allow you to ensure the components are compatible before you pay.

Now let’s move on to the part of the spinning reel that is often forgotten: the gears. If you want a smooth cast, which, let’s face it, everyone does, then the gears are vitally important in ensuring this. When purchasing, the gears also play a hugely important role in limiting line breaks, so bear this in mind.

You will find the gears of a spinning reel inside the reel’s body, and they are typically circular pieces of metal usually constructed of aluminum, zinc, or brass. The main reason for using these metals is that they promise durability, which is very important for a component as important as the gears.

Aside from the material used to construct the gears, the design differs hugely from manufacturer to manufacturer. Instead of being universal, the cut of gears is unique to every spinning reel manufacturer, and some companies have cut their gears in the same way for a long time.

The gears play a huge role in the strength of the spinning reel and the gear ratio, which is incredibly important when catching fish like bass. So instead of overlooking the gears, you must pay close attention to them when buying a spinning reel.

The final component which we will look at is the roller. This part of the spinning reel plays a massive role in the feel of the reel while you use it, as it is one of the primary contact points of the line when it is being reeled in after being cast out.

While friction is essential in the drag system, when it comes to the roller, this is something that you want to eliminate as rough surfaces and resistance could cause your line to break and your catch to be lost. Instead, the best line rollers will allow the line to move freely without sticking, eliminating the risk of breakage. It also removes the risk of your line twisting when you reel it in.

So you must test the roller of a spinning reel before you attach it to your rod and use it to try and catch fish. 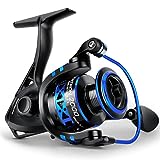 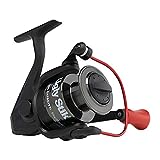 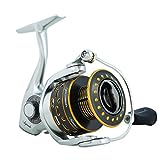 Final Thoughts on the Parts of a Spinning Reel

In this guide, we’ve told you everything you need to know about the parts of a spinning reel to ensure you understand how this type of reel works when you are out fishing next.